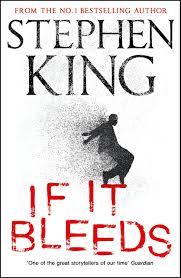 A collection of stories that have echoes of other of King’s works, showing an obvious fascination with the supernatural and unexplained. Each has its charm, though I have my definite favourite.

In Mr Harrigan’s phone we focus on good guy Craig, a young lad who earns pocket money by reading to the elderly Mr Harrigan. Over time they became almost friends, and Mr Harrigan definitely plays a part in the developing personality of this young man. Four times a year Craig is sent a scratch card and one of them ends up earning him three thousand dollars. He is grateful to Mr Harrigan (who brushes of this event) and buys him an iPhone. Mr Harrigan was dismissive of the gift, but then comes to see how useful it could be. Entertaining to see a character at such an early stage in media use, but when Mr Harrigan dies and still seems able to help Craig out we wonder just how much power these objects actually have.

The second story, the Life of Chuck, was one of the least engaging for me. The story begins with what looks like the end of the world (though we never know what’s going on) and then works backwards in time to explore the character of Charles Krantz and his life. The latter parts of the story were more interesting, so it ended more strongly than it began (with the opening of the narrative).

Though I enjoyed the second story it was always going to be hard to stand up against If It Bleeds, a longer story focusing on the lovely Holly Gibney and a very unusual case. The story begins with an awful attack on a middle school and then we go into what I think of as typical King territory. Holly becomes aware that there is another outsider, passing through time and feeding off the misery of mankind. This time round, it’s actually engineering the horror and a Holly is determined that it will not succeed.

The final story I confess to almost leaving out – anything called Rat immediately puts the proverbial fear of god into me. The story had echoes of The Shining, focusing on a writer who has never managed to complete more than short stories. A failed attempt at a novel had him almost burning down his house, so his wife’s concern when he plans to visit his remote family cabin to write his novel is understandable. Tucked away, things are going okay. Then he comes down with a serious flu, and is cut off by a serious storm. Thinking he’s going mad, our writer ends up making a deal with a rat. The extent to which this was imagined is never clear, and yet it works.