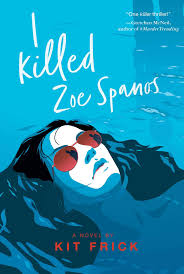 From the moment I saw this cover I couldn’t wait to read I Killed Zoe Spanos. With the focus being on a young woman who has confessed to a murder, and another who is determined to uncover the truth it promised lots.

When we first meet Anna Cicconi she is not in the best of places. We get told about excessive drinking, potentially dangerous hook-ups and blacking out with no recollection of events. As part of her attempts to get her life back on track she takes a summer job for a wealthy family in the Hamptons, acting as an au pair. Upon arrival she is somewhat taken aback by people commenting on her similarity in appearance to local girl, Zoe Spanos. This isn’t too strange, until we learn Zoe has been missing for months and nobody knows what has happened to her.

As the summer progresses, Anna meets a number of characters linked to Zoe, and she starts to have recollections that – by rights – she shouldn’t be having. She knows things about Zoe and her life that suggest she knew her. It becomes a case not of is Anna hiding something, but a case of will Anna work out what on earth is going on?

The timescale of this book lends to the air of confusion perfectly. As we learn more of the events of the summer, we also learn that Anna is being held having confessed to the murder of Zoe. Some think it’s an open and shut case, while others are convinced Anna might be innocent. I’ll be honest, I couldn’t tell where the author was going with this as there were a number of very plausible interpretations, any of which would have worked.

Definitely one to recommend for fans of Holly Jackson’s A Good Girl’s Guide to Murder series.