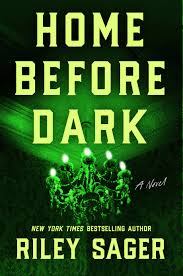 In spite of the relatively eye-watering price it cost to get my hands on this, it was most definitely worth it. Home Before Dark is a book that depends on you not knowing certain details, but even having finished it I think it could stand up to a repeat reading to look for the clues I missed first time round.

Every house has a story to tell and a secret to share we’re told. Maggie Holt’s life has come to be defined by her parents’ ill-fated decision to buy ‘fixer-upper’ Baneberry Hall when she was a child. The family only lived there for 21 days – and something so awful took place within those walls that they fled one night, never to return.

Everyone in the surrounding area – and many others – seems to know the story of Baneberry Hall as Maggie’s father released a book chronicling their short time there. From the time they look around the property we know there is something odd going on. There are the ubiquitous paranormal hints with strange noises, unexplained atmospheric changes and events that would – with no exceptions – have most people scared…snakes appearing from the kitchen ceiling, record players mysteriously starting to play and repetitive thumping noises. The history of the house doesn’t help – with a number of unexplained deaths and the murder/suicide of the most recent owners.

We don’t learn much of this until some time later. Upon the death of her father, Maggie learns that she has now become the owner of Baneberry Hall and although nobody in her family wants her to return, she is determined to do so. Much as I questioned this, I do understand that with so much of her life defined by this book and the events described within its pages she wants answers. And, boy, does she get them!

I loved the way this book told us about Maggie’s experience in the present but interspersed it with excerpts chronicling the story of her father and mother, and what happened to the family. This was a great way of divulging snippets to help establish what happened while maintaining the tension created.

There are – as you might expect – a number of attempts to throw us off the scent. It was, in hindsight, clear that things were not quite as Maggie had been led to believe but I was open-mouthed as we reached the climactic moments…I can’t wait for others I know to read this and then to be able to discuss it with them.
Highly recommended.