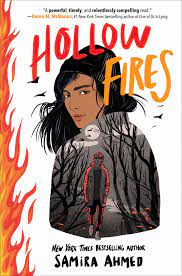 Due for release in early May, I’m grateful to NetGalley for giving me access to this prior to publication. From start to finish this had me hooked, and I think it is Ahmed’s most powerful book to date.

It’s easy to feel outrage at the kind of privilege shown throughout this book. It’s easy to feel angered by the behaviour of the two young adults who plan, carry out and almost get away with their murder of a younger teen. It’s easy to feel the fire of injustice that forces Safiya into action. But it’s also easy for many readers (and I probably count myself in this) to feel that anger and yet to not be further impacted by it. This is not part of my daily experience, and I fear that my ‘fire’ as I finished this book could be seen as ‘hollow’ if I don’t do anything with it. This is something I need to digest further.

The story of Hollow Fires itself is a compelling one. It begins when Jawad, son of Iraqi refugees, is arrested when his English teacher believes the home-made Halloween costume he proudly takes into school is a suicide bomb. The absurdity of this situation stands out…but even after being cleared of all charges, Jawad is persecuted. He becomes known by the moniker BombBoy and the growing sense of unease felt by students who are not white is deftly portrayed through the character of Safiya. When Jawad goes missing, there is an appeal but the police quickly write him off as a run-away.

Safiya has always wanted to be a journalist and she has an inquisitive nature that doesn’t allow her to blindly accept some of the things she’s told by those in authority. She is determined that people should not accept this version of events. Set against a growing backdrop of racially-motivated attacks, Safiya is convinced there is more to Jawad’s disappearance. When she finds his body wedged in a culvert in a little known part of the local park, Safiya knows that there’s more to this story than people are prepared to acknowledge. She takes it upon herself to try and get justice for Jawad, determined that those responsible will be held to account.

There are issues with the way Safiya interferes with an ongoing investigation. The way certain characters behaved didn’t always seem realistic, and there’s still a part of me that feels the outcome of this case would not, in reality, have gone quite as it’s presented here. However, these were not enough of a distraction to prevent me from feeling this is a book I would highly recommend.