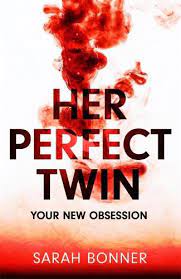 The joy of finding a book that you get so caught up in cannot be underestimated…having read so many of Bonner’s reviews on Twitter, I was desperate to read her debut. I am stunned!

Due out in January 2022, I’m so grateful to NetGalley for letting me get my hands on this early…and I’m desperate to read it again to try and make sense of the twisted mind-games and genius plotting that I’ve been fortunate enough to read.

The book started with a humdinger of a quandary. Megan finds a picture of herself on her husband’s phone wearing electric blue underwear. Only she doesn’t have any. I cannot imagine what would go through your mind in this situation, but when we learn Megan has an identical twin her behaviour and subsequent actions make sense. At this point I imagined we’d get an engaging thriller as we followed Megan try to cover up her actions, but really wasn’t expecting anything too out of the familiar.

If I could only take back all my pre-judgments I would be happy, because within a relatively short space of time we are given a complete bolt out of the blue.

Nothing will be given away here, but it didn’t take long for me to realise we were in far from familiar territory and being played. And there were more shocks to come!

Told in four parts, this story was so cleverly constructed that I really want to go back and reread it to see which elements I’d missed in the initial read. The characters were far from idealised, but those flaws actually played a key role in the success of the plot.

I am so excited to see what friends make of this when it’s released…though I’m still not entirely sure there isn’t something I missed!