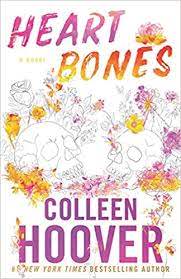 Hearts don’t have bones so they can’t hurt…proving people who think this wrong is, I think, the reason for writers like Hoover, who seem determined to show us the many ways in which loving someone can both heal and hurt in equal measure.

Our main character in this is Beyah Grim. When we first met her she’s living in a trailer park with her mother, a meth addict, and is faced with the pretty unpleasant scene of her mother having overdosed in their living space. Seeing how badly Beyah’s home life has impacted on her is made startlingly clear when she says that dying was probably the one good thing her mother did for her. Only hours after this shocking discovery, Beyah is told she is being evicted from the only home she’s known because her mother didn’t pay rent for the last few months. Her only choice is to phone the father she doesn’t really know.

So Beyah finds herself on a plane headed for Texas, where she is going to stay until she can take up her place in college. As soon as she meets her father at the airport it’s clear that her mother’s addiction has robbed her of the chance to have a relationship with her father, and though he has to take some blame for not pushing for a relationship it’s hard not to feel sorry for people like this who fall through the cracks.

Spending the summer surrounded by money and opportunities is a tough thing for Beyah to accept. She is the proverbial fish out of water, and resists her stepsister Sara’s attempts to fix her up with a friend. What we quickly come to realise is that Beyah has already made quite an impression on this friend…and so starts a summer fling that we predict will end in tears – but I definitely didn’t predict just how emotionally I’d react to it.

This is probably a book that’s good to go into without knowing too much. I feared it would be bleak and yet found myself laughing and enjoying this far more than I predicted. Of course it has moments that will upset you, but at its heart it’s a story about having the courage to stick with those you trust.