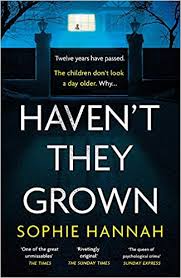 If there’s one thing Sophie Hannah can do well, it’s create a scenario where you know something is going to be revealed to shock you…and be totally amazed when we see what happens.

Beth is a fairly typical mother of teenagers-busy, a little stressed and trying to squeeze things into the time she has available. When we first meet Beth she’s taking her son to a football game, via a detour to the last known address of her ex-friend Flora. She watches the house and sees her ex-friend in the driveway, calling to her children. Nothing unusual there…except when the children come out of the car they look exactly the same as they did twelve years ago.

Now, the moment we see this my brain went into overdrive trying to work out what on earth was happening. Was Beth mad? Was there some weird supernatural element to the story? Could there be any rational explanation for this sight?

Many people might have walked away from such a scenario, figuring that there was a reason for the two families not keeping in contact. Thankfully Beth is a little more dogged than most. No matter how crazy she feels, she has an intuition that there’s more to this story.

Thus starts one of the strangest books I’ve read in a while.

There’s a lot about this story that makes no rational sense. Few people would pursue this trying to work out what has happened. Once we start to get answers drip-fed to us I couldn’t fathom why someone would even contemplate such action, and when the true extent of the subterfuge is revealed I felt somewhat sickened.

While we might feel somewhat ambivalent towards Beth, by the end of the story we can see why she does pursue the truth and perhaps even applaud her actions.