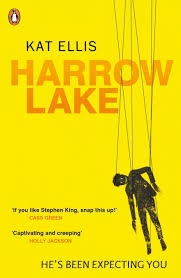 Lola Nox has always found it difficult to live her own life. Daughter of celebrated film director Nolan Nox, she has got used to someone watching her every move and not getting completely free choice over her actions. She knows there are secrets in her family, but when we first meet her it’s evident that Lola has secrets of her own.

The opening was not immediately engaging. Lola appeared to have had some kind of falling out with her father, her behaviour indicates daddy issues and she really was not very likeable. However, when she is taken home and finds her father bleeding in his study we can’t help but feel some sympathy for her.
Suddenly Lola is sent to Harrow Lake, her mother’s hometown and the setting for her father’s seminal movie. It’s a weird place, and the strange behaviour of certain characters does little to make Lola comfortable.

Before we know it there’s a creepy movie festival taking place, weird goings on and Lola is having all manner of odd occurrences. She knows that someone in the town may hold the key to what happened to her mother, but few are willing to divulge their secrets.

During the story, as Lola becomes more and more akin to one of the characters in one of her father’s slasher movies, we begin to piece together fragments of the stories being told. We learn about the darkness of Harrow Lake, the secrets Lola has and the events that have led her to this moment.

There’s a dark undercurrent to this, and though elements were undeveloped it was – on the whole – a creepy tale that will entrance horror fans.

Thanks to NetGalley for letting me read this prior to publication, scheduled for August 2020.