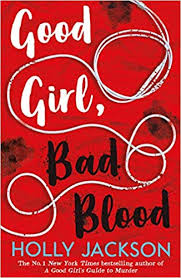 Though I’d enjoyed book one a lot, it had a rather earnest quality to it that felt (on occasion) jarring. This one took a decidedly darker shift and it really had me hooked from the beginning.

I loved the fact that Pip summarised some of the events of A Good Girl’s Guide to Murder right at the start because it gave me the requisite reminder without me having to reread the book. We can see from the outset the havoc that her investigations have wreaked on Pip, and how determined she is not to get caught up in something like this again.

You have to admire the reluctant hero figure who, against their better judgement, does what they know is the right thing. Having fought against her instincts, when Pip learns that her best friend’s brother has gone missing she tries to advise the family to go through the appropriate channels. Unfortunately, because Jamie is twenty-four the police don’t feel investigating his disappearance is a priority. As a result, Pip finds herself taking up the hunt.

What follows certainly boosts the ratings for series two of her podcast, but it leads Pip into dangerous territory.

We can see people aren’t always truthful. Sometimes adults get things wrong and, more often than not, the truth can be elusive.

Pip and Ravi’s dedication is commendable. As we move closer to learning what happened to Jamie we realise that Pip has got herself mixed up in a much bigger story. It wasn’t at all what I expected, and once all the pieces came together it was obvious just how well-planned this had been.