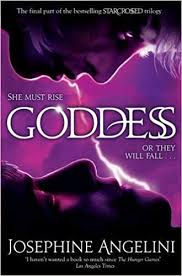 Having created rather a mess, we now reach the point where the Scions realise they have to use their talents to challenge the gods. Certainly a battle to remember.

Once again, Helen is having to use her skills to do things nobody should have to consider. After the battle in the last book, her, Lucas and Orion have become blood brothers – and Helen has taken on more skills. The question is, can she come up with the answers to prevent the mortal world becoming playthings to the gods?

This reminded me of a game of chess. Characters were each plotting moves, and some of those closest to Helen were being used in the most awful way imaginable. There’s the ongoing love triangle to resolve – though with Helen’s feelings for Lucas never in question, this isn’t much of an issue.

At some points this read like a script for a very high-budget movie. We had all sorts of mythological creatures coming into play, and we get little cameos from everyone…including Zeus.

Having some of our questions answered definitely made certain scenes easier to read. There was a clear sense that not everything was resolved, and the suggestions of what could happen in the future left it in a great place.