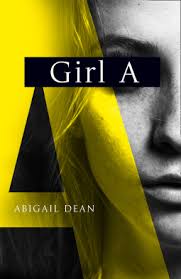 Girl A is not an easy read, but it’s a fascinating one – and on e I will recommend people get their hands on when it’s published (due January 2021).

At the age of fifteen our main character, Lex, fled her home – dubbed the ‘House of Horrors’ by the press – and then people learn the shocking truth about her home life. Now a successful lawyer, Lex has some understandable issues and things she does to protect herself from the trauma she lived through. These become more apparent when she is asked to be the executor of her mother’s will.As Lex deals with the realities of managing an estate of someone who was complicit in her suffering years of neglect and abuse, we see her fracture.

Alongside the focus on Lex in her present, we also learn of the gradual decline in her family situation which, ultimately, resulted in the deaths of some of her siblings and their enduring mental and emotional scars. It’s hard to feel sympathy for the adults in this, but there is an attempt to help us to understand the way this situation developed and to get into the head of the main perpetrators.

I was pleased that the author chose to not dwell on the abuse hinted at. Seen through Lex’s eyes it seemed to be a way of trying to come to terms with her feelings for those she’s interacting with now. While I came to admire Alex’s resolve and courage, it was clear that she was a long way from okay. Her relationship with her older brother, Ethan, was a difficult one and only felt more fragile once we learned of his role in events.

I’m grateful to NetGalley for granting me access to this in advance of publication, and while it’s not a pleasant read it is definitely highly recommended.