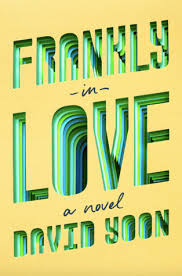 In Frankly in Love we have the sideline story of Frank planning to fake-date his friend, Joy, so he can get to take out a girl in his class. He knows his parents would not appreciate him dating a white girl (after all, they disowned his sister for her choice of partner) so he and Joy cook up an elaborate plan.

Things set in motion often pick up their own momentum. That’s exactly what happens here and, before we know it, there’s a pretty big relationship mess. However, the novel seemed to be more about a young boy trying to work out his place in society. It explored his feelings of identity and showed the sense of a developing relationship with his parents.

There was something about the voice here that I found really hard to feel much for. Frank was quite self-obsessed and there were some events that had huge glowing signs pointing them out, yet they were ignored because they didn’t register on Frank’s radar. Perhaps if I’d felt more about the main character I’d have been more engaged with this.