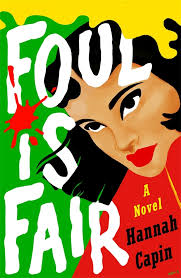 With its focus on murder and a quest for power, Macbeth is an easy story to tap into. The determination to have sway over others, and the corrupting influence it has on you, is a feeling so many can understand – even if they wouldn’t act on it. While the supernatural element of the witches is a harder thing to transpose to the modern day, the influence these characters have is something we can fear.
With Capin’s ‘Foul is Fair’ we are brought straight into the modern era and given some very topical scenarios to wrestle with.

Our main character, Elle, starts the book heading out with her close group of friends to a party held by a student at a local school. The night of the party sets in motion a rapidly darkening series of events, that we just know is going to end badly. On the night of the party Elle is drugged and assaulted by a group of students. Their leader, Duncan, is the main person she blames but each and every one involved in the attack does – in Elle’s eyes – deserve to pay for their actions.

Intent on revenge, Elle enlists her friends (the coven) to research this group and find a way in. She enrols in St Andrews ( her parents’ willingness to transfer her to the school attended by the attackers is one of the main issues with this) and begins her campaign to bring down those responsible for her attack.

Elle picks out Mack, the boy who knew enough but wasn’t involved, to be the one to help her gain what she wants. She seems to fall for him, but it was clear he didn’t stand a chance. Elle wants payback, and the way she goes about it is ruthless and – maybe – just a little bit admirable.

This is graphic. Capin spares nothing and we see the demise of the group members in full glorious technicolour. While I didn’t like this, I definitely felt I was encouraged to sympathise with Elle and look beyond the callousness of her vendetta.

I’m grateful to NetGalley for allowing me to read this prior to publication, and I can’t wait to see how students who are studying Macbeth react to this once it’s out.