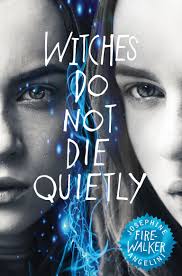 Having made it back to her own world it was hard to see what would happen to Lily next. She is with Rowan and her family, and the appearance of Rowan seems to have calmed Samantha down a little. Unfortunately, too many people want to know where Lily disappeared to for three months and how she is miraculously healed.

Initially, Lily is reluctant to provide answers. Eventually, under Rowan’s guidance and when a familiar terror from the past turns up in this world, Lily realises she has to trust her friends and create a new coven.

Initially, this doesn’t make much sense. The worlds don’t mix well, and I think a lot more people would have pursued this further in reality. That aside, it was good to see some more characters and definitely good to watch Lily battle with the fact she is still communicating with Lillian.

Before too long, a painful decision has to be made. Lily and her group have to get back to Rowan’s world.

In between the personal character stories, there was a real focus here on the alternative realities and trying to get us to understand Lillian’s actions. We also got to see some interesting developments with regard to the Woven and wha5 Lily’s presence in this world could signify.