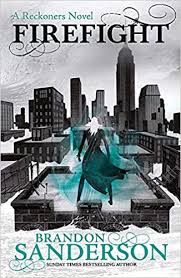 Having now acquired the nickname of ‘Steelslayer’ David has got himself in position with the Reckoners and they are on the tail of another Epic. This time, they are heading to the former Manhattan – a hippy-like place that has been submerged by water – in order to fight the epic known as Regalia.

Unfortunately, David has to deal with the fact that he is in love with Megan, the epic known as Firefight, whom everybody else wants to kill because she murdered one of their own. His mentor, Prof, is also an epic and is clearly more than accustomed to using his powers when he needs to.

From the outset, it is evident that nobody is being entirely honest with anyone else. They do a bit of scouting and find another couple of lesser epics that they decide to try and take down in an attempt to draw out their primary target. David masters the art of using his jet-pack (for want of a better term) and the new characters lend a bit of an alternative view to events.

Throughout this I was intensely irritated – probably more than I should have been – by David’s repetitive comments about being bad at metaphors. The obvious error each time he did this really annoyed me and i was amazed that nobody had spotted it. Of course, we learn later, it was deliberate just to set up what is meant to be an endearing moment near the end. It wasn’t, but that’s just my opinion.

Once we got underway with the nitty-gritty of this it did get more interesting. It seemed unevenly paced though, although the final moments were definitely interesting. Not entirely sure what we’ll get to see of David in the next one – there’s more to this boy than we’ve been led to believe I’m sure of it – but it definitely looks like it’ll be worth checking out.