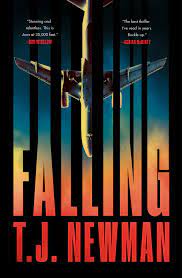 From start to finish I did not want to put this down. I’d heard rave reviews, wondered if it would be worth the hype and I’m happy to jump on the bandwagon and urge people to read this book.

We open with a routine day; a family preparing for the day ahead. Little do they (or we) know just how rapidly their lives are about to change once the cable guy drops in.

Bill, a pilot of some standing, has been called onto a last minute flight. He regrets letting down his wife and kids, but his duty is important to him. The chilling moment when Bill learns that his family are being held hostage and he has a choice to make had my jaw dropping! Allow his family to be killed in order to protect his passengers, or save his family and be responsible for the deaths of over a hundred innocents. What a dilemma!

Particularly since 9/11 and the increasing instances of terror attacks, this is a very real fear that Newman plays upon. How much do we value duty and family? Which would take precedence? Should anyone ever have to choose? I could not imagine being put in this position and it was gripping to see this dilemma play out.

However, the action focuses on a lot of other characters. We follow them on board and through their experiences and this really brought a sense of immediacy to the story. Some very serious issues were raised, and I genuinely found myself far more caught up in this element than I thought I would.

Packed with drama, plenty of heart-stopping moments and a truly Hollywood ending…what’s not to love?