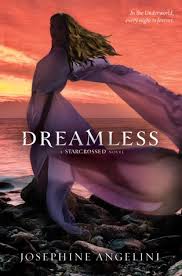 In many ways, a standard second part of a trilogy but this was ultimately frustrating as so much was unresolved.

Helen is having to deal with the sudden arrival of her real mother. There’s weird things happening in Helen’s dreams and nobody is quite sure how to resolve the issues from recent events.

We quickly learn that a Helen is a descender and has the ability to travel into the underworld. She is, according to prophecy, the one who will do what is needed to beat the curse of the Furies. Unfortunately, she won’t be doing it with Lucas by her side.

The relationship element irritated me. They’re being very honourable and avoiding each other as it could start a war. However, they are still clearly enamoured and only being prevented from doing anything because they’re told they are first cousins. Helen’s mum clearly indicates this isn’t the case so it seems she has other reasons for wanting to keep them separate – which may be where Orion comes in.

So, a weird love triangle. An awful lot of hanging around in hell and not really getting any further with anything…all while someone evil decides to play god and try to engineer a situation that can be used to their advantage. There’s more nods to mythology and an awful lot suggested as to what might come next.