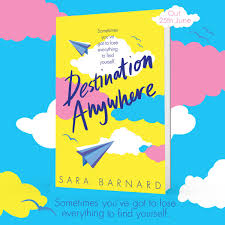 A difficult story to review in some ways, because there were elements that didn’t quite seem plausible but everything else about this book drew me in, tugged at my heartstrings and had me feeling Barnard had perfectly captured that sense of uncertainty so many feel but never want to admit to.

Our main character is Peyton King, a seventeen year old travelling on her own to Canada. She has no discernible plan, has walked out on college and left a note for her parents…my first thought hearing this was what on earth could have happened to get so bad that this extreme action seemed like a good idea? As we journey with Peyton we learn more about her, and how she came to be in this situation.

Peyton, we learn, was bullied throughout her five years at secondary school. Isolated incidents initially, but they do gather in seriousness and there’s no doubting the impact they’ve had on her. Spending all this time with no friends, Peyton has a somewhat skewed view on friendship and the extent to which she’ll sacrifice herself to have what she sees comes so easily to many others. When she starts at sixth form college she is quite desperate to form friendships…and when she falls into a group she gets caught up in the excitement of this that she never takes the time to think about how healthy it is for her.

This won’t be an experience everyone can identify with. We see things from a viewpoint we might not necessarily understand, but Peyton herself also comes to see that she made choices in this scenario. No matter what self-awareness she reaches, her so-called friends were awful in so many ways – but it seems they each had their own issues. However, when we reach the dramatic revelation of what they actually did I was appalled.

There’s no quick fix here. Peyton is, obviously, finding things out and luckily she ends up taken under the wings of some more seasoned travellers who offer a very different definition of friendship. She has a wonderful travelling experience and this is definitely more of a positive experience than you might imagine someone in her position might have had.

There were some wonderful descriptions of the travel experiences, and the way this ended had a sense of perspective. Not everything was magically solved, but there were steps towards a more positive hopeful future.

Thanks to NetGalley for allowing me to read this prior to publication.