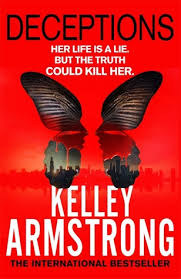 TRUST NO ONE
Olivia Jones is desperate for the truth. The daughter of convicted serial killers, she has begun to suspect that her parents are innocent of their crimes. But who can she trust, in a world where betrayal and deception hide in every shadow?

RISK EVERYTHING
Liv does have one secret weapon: a mysterious sixth sense that helps her to anticipate danger. The trouble is, this rare power comes with its own risks. There are dark forces that want to exploit Liv’s talents – and will stop at nothing to win her to their side.

FACE THE TRUTH
Now Liv must decide, before it’s too late. Who does she love? Who is really on her side? And can she save herself without burning down everything that matters most?

Part of my issue with this was just as soon as we started to look as if we were getting somewhere, things changed tack and we were back on another new route.

Olivia is increasingly having visions. They seem to be memories of events she’s never lived, but their purpose is evident…to help her figure out the reality of her situation.

She and Ricky are still in a loved-up state, but there’s clearly more to this than we first thought. Her friendship with Gabe continues to be a difficult one. There’s plenty of suggestions that both might want more, but it’s never going to be so straightforward.

The love triangle went on and on and on. The developments with the fae and their feud make it pretty clear there’s no easy answer here. Some interesting developments with regard to Olivia’s birth parents – and not all of it is quite as we expect.

By the end of the book I was more than a little frustrated with the main characters, but also wondering how a group of otherworldly creatures can be so rubbish at sorting things out!