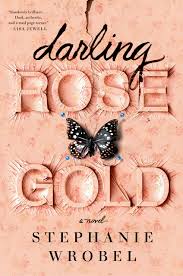 Patty Watts and Rose Gold Watts…two names you’ll shudder to hear once you’ve ended this. While I felt sympathy for both characters, it’s hard also to not feel appalled by both.

Before you start reading, it’s clear this is a book that’s not afraid to plunge into the darkness. It heads straight for the darkest point you can find, roots around and then burrows deeper. I was expecting something pretty nasty, but as the dots started to join together and I got an inkling of where this might be going I almost feared reading on and having my suspicions confirmed.

Our story hinges on the dysfunctional mother and daughter combination. For years we are told Rose Gold was ill. That she was in and out of hospital, incapable of feeding and struggling to live. That eventually it was discovered her mother was making her ill. It’s no surprise that her mother is then imprisoned for her actions.

What surprised me was that we learn towards the end of Patty’s incarceration she is visited by Rose Gold. We learn they are attempting to restore their relationship, and that upon her release Patty is going to live with Rose and her son. Oddly, in spite of knowing her uncle committed suicide there and her mother was beaten there we are told Rose has bought her mother’s childhood home. There’s something odd going on, but it takes some time to work out just what.

The book alternates between two viewpoints and this is definitely a major part of the novel’s success. Hearing each character’s thoughts means we gain some understanding of their thought processes. We’re privy to their suspicions of each other, and the strange manipulative behaviour each exhibits in this bizarre, wholly dysfunctional relationship. We’re never sure who’s telling the truth, or who’s manipulating who.

By the time we approached the climax of the novel I really was amazed we’d taken this final turn. Chilling and emotionally terrifying behaviour from both characters and I couldn’t help but feel that neither deserved the fate they were dealt. There were no winners in this story, and though both Patty and Rose had their very obvious shortcomings I couldn’t bring myself to despise either of them because they were both, in so many ways, victims.