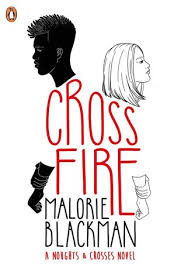 I still recall the excitement I felt when I first picked up Noughts and Crosses. Five books in, some familiar faces, and it still had me gripped. Thank you to NetGalley for allowing me to read this before publication.

Crossfire focuses on some pretty hard-hitting events while also allowing us to get a little closer to our characters.

We have Callie, now 30, a lawyer preparing to be a judge. She still regrets her behaviour as a teenager when she let jealousy get the better of her. Her feelings for her boyfriend Tobey were complicated, but even more so now. Tobey is about to become the first Nought Prime Minister, but he is accused of murdering a well-known businessman thought to have underground links. He wants Callie to represent him.

Tied into this story are the characters of Libby and Troy. Libby has lived her life surrounded by hatred and contempt. She gets some rather unexpected news, but isn’t prepared for what that brings. Troy is Callie’s much younger brother. His family links also place him in danger. When the two students are kidnapped we can’t help but wonder how much family ties will bind people to a decision.
Set against a background of rising racist behaviour, we get a stark reflection of contemporary society. As always, this series tells some unpalatable truths.