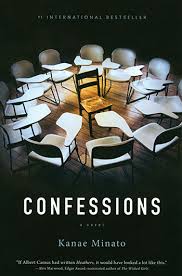 How far would you go to get revenge? In this, we see the depths someone is prepared to plunge to in their quest to avenge something done to them.

The opening chapter sets up a terrible situation. A teacher stands in front of her class to explain why she is retiring, to explain how the death of her daughter earlier in the school year has affected her and to make the revelation that the death was not – as found – accidental, but murder and committed by two students in the class. Having outlined what seems to be a truly horrifying scenario, the teacher calmly outlines the way she has set about getting her revenge.

At this point we move into shorter chapters, each told from a different perspective, that provide us with further information about what happened/what led to it and the after-effects. I was still reeling from the opening and yet found myself compelled to try to work out what was going on.

Throughout, I was struck by the restrained narrative style and the attempts to justify certain actions were certainly interesting. However, the final moments turned everything on their head and made me reevaluate certain characters/ their actions.

An unusual read, and one I wouldn’t have picked up were it not for a recommendation from an online group. Definitely worth reading.