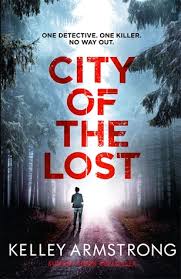 Casey made some poor choices when she was younger. She suffered a brutal attack when her boyfriend was threatened for selling drugs on someone else’s turf. Abandoned by her boyfriend Casey endures an awful assault. Eventually she gets her own back and kills a man.

The guilt over her actions never goes away, even though she trains as a detective. Her best friend, Diane, has been with her throughout and has her own problems…an abusive ex. When things get too uncomfortable, plans are made to escape to a place few know about. A place where people can start afresh. A place where everyone is hiding something. Rockton.

Casey is there as a new detective. She’s not sure why she’s needed and then learns there’s been a number of unexplained deaths. Body parts found, and signs that someone dangerous is causing problems. Having thought she was finding a safe place, Casey starts to think Rockton is a lot more serious.

The story started quickly and there’s plenty of action. We get lots of characters who we dig into and learn about. There’s a mysterious group in charge who definitely know more about some disreputable situations than they ought to. And there’s a romance, of sorts, as Casey grows closer to someone who’s got their own reasons for wanting Rockton kept safe.