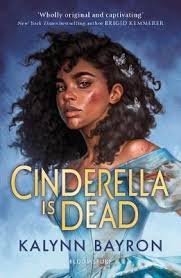 The story of Cinderella is one that everyone knows. But what would you do if the story was a lie? That is the premise of this story, and it was one I was really excited about reading so I was thrilled to get an ARC from NetGalley to read in exchange for my honest thoughts.

Our story focuses on Sophia, a young girl who lives in Lille where everyone abides by the rules set. Every year girls have to attend the Annual Ball – if they are chosen they must be subservient to their husband, and if they are not chosen nobody hears from them again. Though some recognise the problems with such a regime, none seem prepared to stand up to fight it.

Sophia would like nothing more than to live with her childhood friend, Erin. When the time comes for them to attend the Ball, things don’t quite go to plan. Sophia escapes, and takes refuge in Cinderella’s mausoleum where she is found by Cinderella’s only living descendant, Constance. Buoyed by their sense of belief, and hope for a different future, the girls take on the challenge of confronting the King. They take on a journey fraught with danger, where nobody is quite what they claim to be, in a desperate attempt to change the lives of girls in the future for the better.

While the story follows a rather predictable path, there were attempts to offer something new. We got strong female characters who weren’t afraid to stand up for their beliefs. There was the odd twist to illustrate the idea that sometimes people can hide their true desires from others, and there were hints that people can change things if they are true to their convictions. Perhaps the Cinderella retelling offers less than it might, but it was certainly an interesting read.