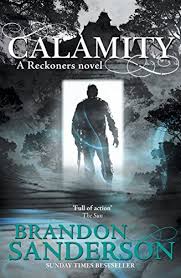 While it’s always good to see how an author chooses to resolve a series, this one felt quite different to what I imagined.

This time around David and the Reckoners are following Prof to the city of salt. They know he has something planned, but can’t tell what. They do, however, know that they need to offer him the chance to face his fears and claim the darkness, as opposed to simply killing him now he is an Epic.

The story focuses on the planning and development of resources we aren’t expecting. We see Megan come into her own with her ability to use her powers, and we also see some characters that we wouldn’t expect to get involved playing their part in this battle.

Prof remains a threat. He seems determined to vanquish anyone in a position to oppose him. David and his group come up with some very daring plans. They rescue Tia and even bring back Prof’s child from an alternate world to try and battle him. Nothing is seeming to work.

While I don’t want to give away exactly how this resolves itself, the presence of Calamity is instrumental – as is David’s willingness to confront his own weaknesses and fears.