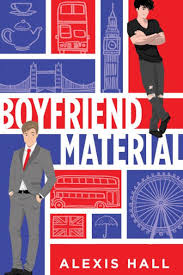 Boyfriend Material was just what I needed right now…funny, a bit silly, romance in dollops (and not always where you’d expect it) and that feeling that things would work out just the way you knew they would even if there were bumps along the way.

Our story has two rather misguided souls as our central characters. Luc – son of two ex-rock stars, and who has a tendency to disgrace himself in public – and Oliver – lawyer who’s determined to keep control of everything around him. These two have met before, and not got on particularly well. But they are thrown together when Luc needs a ‘respectable’ date for a work event. Oliver agrees to be his fake boyfriend…so it’s just a matter of time before they end up together for real.

A bit like a rather over-the-top TV sitcom, there were somewhat excruciating jokes and some cliched characters. There were scenes where you could pretty accurately predict what was coming, almost down to the jokes. I didn’t particularly like the representation of the wealthy characters (too many cheap shots at something they seemed to have little awareness of), but the lurking irritations were very much on the outskirts of the central story.

Luc and Oliver might be infuriating in real life, but they seemed to bring out the best in each other and I was definitely rooting for them. Don’t expect anything unexpected here and you’ll be happy.