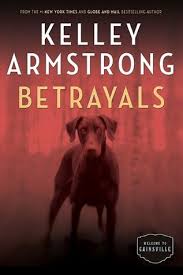 When Olivia’s life exploded–after she found out she was not the adopted child of a privileged Chicago family but of a notorious pair of convicted serial killers–she found a refuge in the secluded but oddly welcoming town of Cainsville, Illinois. Working with Gabriel Walsh, a fiendishly successful criminal lawyer with links to the town, she discovered the truth about her parents’ crimes in an investigation that also revealed the darker forces at work in the place that had offered her a haven. As if that wasn’t enough, she also found out that she, Gabriel and her biker boyfriend Ricky were not caught in an ordinary sort of love triangle, but were hereditary actors in an ancient drama in which the elders of Cainsville and the mysterious Huntsmen who opposed them had a huge stake.

Now someone is killing street kids in the city, and the police have tied Ricky to the crimes. Setting out with Gabriel’s help to clear Ricky’s name, Olivia once again finds her own life at risk. Soon the three are tangled in a web of betrayals that threatens their uneasy equilibrium and is pushing them toward a hard choice: either they fulfill their destinies by trusting each other and staying true to their real bonds, or they succumb to the extraordinary forces trying to win an eternal war by tearing them apart.

The whole link between Gabe, Liv and Ricky isn’t going away, so we can safely say nothing will get resolved any time soon as they try to figure out the best way forward. Things are still good with Ricky and Liv, but there’s more than a few nods to Liv and Gabe being a potential relationship. So, until that point we keep muddling along with nothing satisfactorily sorted.

This time round Ricky is under suspicion for crimes we know he didn’t commit. Supernatural elements are required to help figure it out, and the backdrop of the two fae forces battles on.

A few dramatic moments and plenty of opportunities for each to come to the rescue of the other. We get a number of past visions thrown in and hints of ongoing plotting by the two fae groups.

This felt like business as usual, but I’m hoping we get some answers soon.