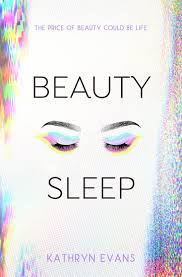 Laura and her brother are suffering with a particularly rare form of cancer, and they are given the opportunity to trial an experimental treatment. Her last memory is of sticking a picture of Prince Andrew and Sarah Ferguson into a scrapbook. When she next wakes, having been successfully ‘frozen’ until her cancer can be treated, it’s forty years in the future.

The initial focus on Laura waking up was done really well. Her confusion about interacting with the world around her was fascinating to read. As she learns about how the world has moved on since the 1980s it highlights just what rapid changes there have been, taking them to a quite logical future position that – if I’m being honest – is quite scary.

We spend a lot of time with Laura in the clinic where she was treated. The clinic’s founder, Miss Lily, has built her wealth on the back of a society obsessed with appearance, and there are hints that there may be more to this from early on.

Laura becomes something of a phenomenon – this real-life Sleeping Beauty – but the focus is on her settling into life at school as she begins to make contact with her best friend (now middle aged) and try to determine who is telling her the truth about the events that led to her being in this position.

As Laura pushed for answers I couldn’t help but feel some of her behaviours became unlikely. I found it hard to believe that people in possession of the kind of technology they had would not have realised sooner what was going on. And the actual revelation of what had been happening and the role Laura played in it didn’t quite feel as seamless as it might have.

A bold story which raises some very interesting questions about our contemporary attitudes to so many things. I can’t wait to see what some of those of the age intended for readership make of it.