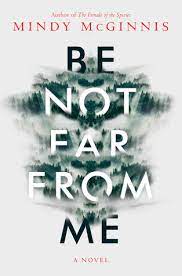 Mindy McGinnis doesn’t shy away from the topics that many would rather not address. In Be Not Far From Me the mood quickly shifts and it was a lot more graphic than I was expecting. I wouldn’t say that I enjoyed this exactly, but it certainly was a story I was keen to finish as soon as I could and work out what would happen.

Our main character is Ashley Hawkins. Resourceful and more than a little intimidating if I’m being honest, and the qualities that made her so irritating at the beginning stand her in good stead as the book progresses. When she sets off for a party in the woods with her friends, it should be a welcome start to the summer holidays.

Of course, things have a habit of going wrong when groups of teens assemble in the woods for drunken fun…and this couldn’t have gone more wrong if they were trying!

Ashley definitely sees herself as slightly better than her friends in respect of her ability to navigate in the woods. The party starts well, but Ashley is on edge because her boyfriend’s ex has turned up. She looks amazing, and Ashley is feeling uncomfortable. She drinks more than she might otherwise be tempted to. When she wakes in the middle of the night to relieve herself, she is stunned to stumble across her boyfriend and his ex having sex!

Now, this scenario is not going to be one that many will ever have to face. Heaven only knows what someone would do. Certainly, the urge to flee would be high. However, Ashley runs and doesn’t stop…until she falls and passes out.

What follows is the grimmest fourteen days anyone could hope to experience.

While Ashley is trying to survive and find her way back to humanity, we learn a little more about her and her past. This allowed us to gain a little more understanding of her character, and while I admired her resilience and ability to cope in adversity there was a part of me that wished the details were a little less graphic.

By the time we get to the end of the book, things have developed considerably. Ashley certainly grows as a character and while I don’t begrudge her the relatively happy ending I can’t help think it’s highly improbable.