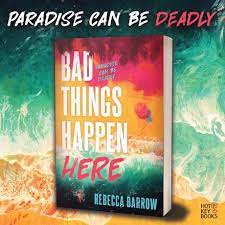 To the outside world, Parris is a beautiful town full of people whose lives are to be envied. What they don’t see is the dark side to the town, the secrets that lurk in the shadows and which keep those who live in Parris trapped.
Our main character is Luca Laine Thomas, from one of the wealthy families who everyone knows. Her life might seem easy, but Luca believes in the curse that is rumoured to haunt the town. Her best friend, Polly, was found dead and though it was ruled accidental, Luca is convinced there’s more to the story.
My initial thoughts on Luca and her friends were not particularly positive. While they expressed unease at the events taking place in their town, they seemed to be as much a part of the problem as anyone else. Their behaviour towards the new neighbour, Naomi, felt a little patronising and yet I hoped things would not be quite as I thought.
Once Luca learns that her sister, Whitney, has been found dead after a party, things got a lot more interesting. Luca cannot accept what she’s being told and decides to carry out her own investigation. What she learns shows that nearly everyone has something to hide.
I found myself caught up in this once the story got underway, and fans of The Cheerleaders or Kit Frick will no doubt love the approach taken. The ending left me rather stunned, but it was nice to see Luca grow in self-belief as she made her way through events. Thanks to NetGalley for giving me the opportunity to read this in advance of publication.
Skip to toolbar