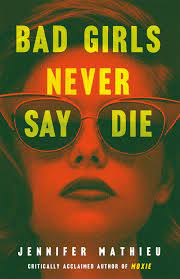 Bad Girls Never Say Die is a book being touted as a feminist reworking of The Outsiders. While it focuses on a group of female characters, the book remains set in the 1960s and – for me – this led to the whole thing having a rather dated premise. If you’re going to rework something seen as such a pivotal text, I wonder why the decision wasn’t taken to set it in modern times and explore modern attitudes.

Nothing much has changed, and perhaps that is part of the point being made.

Our story is told from the viewpoint of Evie, a girl from the wrong side of town who many believe will not amount to much and whose choices are limited not just by money but also by her gender.

Evie experiences a traumatic event. She is rescued by a ‘good’ girl. Scratch the surface though and we see that they are pretty similar. Money does not hide everything.

Though only 15 and always feeling less than her ‘brave’ counterparts, Evie is a character with plenty of spunk. She learns the hard way how this can impact on you and others. Forced to decide just what she wants and how far she’s prepared to go to get it, this is a book that encourages you to think about the mark you want to make on the world.

Interesting idea, and I’m sure it will be loved by many younger female readers.