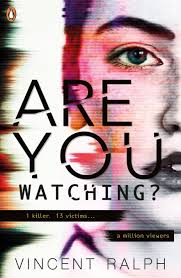 A fast-paced thriller for the social media age. Like Nerve, it has its flaws but it hooks you in, draws you in, twists and turns until spitting you out at the end.

Jess has lived for years defined by the events that happened when she was seven. Her mother was brutally murdered in an alleyway less than a minute from her home. She was the first victim of the killer who has been dubbed The Magpie Man. A solitary magpie has always been seen as bad luck, but this moniker stemmed from her father’s attempts to protect his daughter and make sense of something brutal – he told Jess his mum was taken because she was beautiful and magpies like to collect shiny things.

Now, Jess is determined to step out from the shadows. She wants to find the killer…he has thirteen victims to his name so far, and Jess believes it’s only a matter of months until he tries to find another victim.

So Jess signs up to take part in a reality TV show streamed on You Tube. Each person chosen is filmed one day a week for a month. Whoever gets the highest views will then be watched for a further three months. Jess is determined to take her chance to catch her mother’s killer.

What follows is highly improbable. Jess does some very stupid things. People who should know better allow stupid things to happen. But it all adds up to a jumpy tension-filled story. Highly enjoyable.

Thanks to NetGalley for allowing me to read this in exchange for my review.