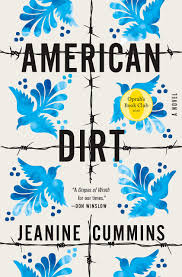 This is a book that you will have heard about – either because of it being talked about as a must-read of 2020, or because of the almighty stink kicked up because the author is white and writing about the experience of Mexican immigrants. So many reviews focus on the slating of the author and the publishers for allowing a woman of assumed privilege to make money from an experience she has no first-hand knowledge of. I’ve read numerous reviews commenting that money should be given to people of the appropriate ethnic background to tell their stories, and we should not be supporting this book. Like other situations, a first-hand narrative is often going to have a rawness to it that you cannot ever hope to emulate, but why on earth would we be so short-sighted as to proclaim that if this cannot happen the stories should not be told?

I don’t think this is a question that has an easy answer, so I read the book in spite of some misgivings.

The story focuses on the tale of Lydia and her young son, Luca. Lydia is a bookseller and her husband was a journalist. They lived a relatively comfortable life in Mexico, but the growing violence surrounding them is hard to ignore. Lydia’s husband writes a piece on a local leader of a cartel (the same man that Lydia has befriended as he is a regular visitor to her bookstore) growing in significance and reach. As a result, sixteen members of the family are massacred as they gather in their home. Our first meeting with Lydia is as she takes shelter with her terrified son in a shower stall, desperately hoping that the gunmen will not find them.

Now, I cannot ever begin to fathom how this experience would affect you. It is – I would hope – never going to be a situation I will find myself in. As such, I couldn’t begin to comment on how truthful this story is or how accurately the writer depicts the subsequent attempt of Lydia to journey thousands of miles with her son to try and escape the threat they are now under and attempt to get to the safety of America.

What I can say, without a doubt, is that the story we are given as we follow Lydia is told in a way that encourages you to consider the situation of not just Lydia but all the characters she encounters. There’s so much highlighted that is wrong with the current system, but in spite of this we see humanity at both its best and worst. We are never quite sure whether Lydia will be safe or not, and the risks she has to take as she tries to protect herself and her son are monumental. She has to make split second decisions that go against everything she has considered normal.

While I cannot hope to add anything to the debate surrounding the publication of this, I do feel it tells a story that will give a brief glimpse into a very unpleasant aspect of our world today. It might not be quite the story many would like, but if it opens the way to more such stories I cannot help but feel it’s a good thing.