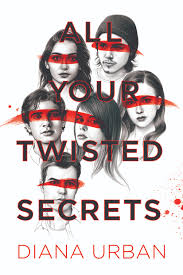 I’d been very much looking forward to this, and it did entertain me though I was left feeling a little underwhelmed by the end.

Amber is our narrator. A keen musician, she has tried hard to fall in with the popular group in school – even doing things that go against her ideals, and failing to stand up for her best friend. She – along with a group of her peers – is invited to a special dinner in a local hotel as a chance to win a scholarship. The door shuts behind them, then they’re told they have an hour to decide which of them should die (being injected with a lethal poison) in order to stop a bomb being detonated.

What follows is a rundown of how the group spend their last hour trying to decide what to do. They unpick their behaviours over the last year and we learn – through their conversation and flashbacks – some of the secrets each is hiding and why they might have someone who wants them dead.

The start of the book felt slow. It’s once they’re in the room that we come to know a little more about each character, but there’s little to make us feel particularly about any of them. I had an inkling of who was behind it, and it seemed odd to me that nobody put two and two together before we got to the big reveal. Things were, in part, resolved by the end but nobody really seemed to learn from this experience and it all seemed a little unnecessary.