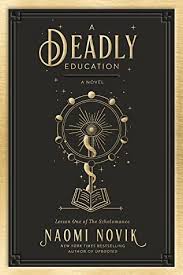 A Deadly Education had me hooked from the moment it mentioned a school where strategy was all…where you graduate or die. I was expecting something dark, and wasn’t wholly disappointed.

This was a school like no other, where danger lurks round every corner (and on the ceiling and behind doors) and if you make it through the year you either have power of the magnitude others should be scared of or you have friends in high places. Our main character is El, daughter of a renowned healer, who is not particularly sociable or likeable, who has skills she wants to keep hidden and who is sick to death of being rescued by the school hero Orion.

From the opening I liked El. Rather abrasive but well-meaning, she is easy to empathise with. Watching so much from the sidelines, she is a rather reluctant main character who realises that sometimes you have to adopt a different strategy to win the long game.

In their final year the power being shown by the dark creatures attacking them is of concern. Orion is doing what he can to keep people safe, but our unlikely alliance offers a different approach. It felt strange to have a book set in a school where there is little adult presence, and where we can see the stakes are so high.

The story itself built as expected. Slowly we see the rising threat and watch as they work out how to tackle it. I was more intrigued by the message from her mum at the end warning her to stay away from Orion – a little late, and of course I want to know what is in store for them in what I imagine will be a dangerous senior year.