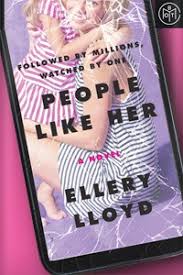 People Like Her is meant to be a timely reminder to consider the role played in our lives by social media. How far does it impact on us? To what extent does it influence our behaviour? Pertinent questions, but this book – sadly – didn’t really hit the mark for me.

Our main character, Emmy, is a popular internet phenomenon. The face behind ‘mamabare’, Emmy lays her life out for public scrutiny. She courts fame, purely to achieve more likes, and this is a lifestyle that more than pays the bills. Making a life out of selling your family might not make sense to many, but everyone will have experience of social media. We all have opinions on online presence, and how far is too far. For this reason I can see the book tapping into a fairly large audience.

Though the book begins slowly as we’re introduced to our couple, it shifts by the end into a much more dramatic affair. From early on we are aware that someone is unhappy with Emmy and wants her to pay for a perceived slight. They are a threat, but how do you ward off threats when they are safe behind a veil of anonymity?

Unfortunately, the character of Emmy was problematic for me. Initially she seems somewhat dizzy, a little naive and determined to milk her cash cow while she could. There was little to really encourage me to empathise with her as everything she did was about her public profile. When she is under serious threat I felt for her, and yet she had acted with such callousness towards those she claimed to care for that I struggled to not blame her a little for what happened. Victim blaming is never going to be a good thing, but it’s so hard not to do that with Emmy that I fear this will ensure some of the comments raised by this book will miss their mark.

Another problem character for me was husband, Dan. A writer in name, who seems to actually do very little, he infuriated me. He seemed to have reservations about this venture, but never took steps to challenge it. What little action he took to offset the influence held by his wife’s job was ineffective, and his final action was – perhaps – even more cynical than those we’d been encouraged to criticise in his wife. Yes, he helps resolve things…but what he does at the end suggests that the influence of the media is more insidious than we might think.

Thanks to NetGalley and Pan Macmillan for granting me access to this prior to publication in exchange for an honest review. I’m convinced this will be lapped up by many, but the cynicism shown by our characters left me without the requisite sympathy I feel was needed to make this wholly successful.