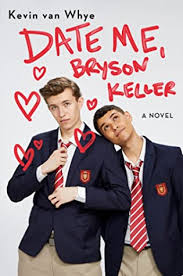 I can’t begin to imagine what it must be like to have to think so much about your sexuality, or to be so cautious about your thoughts/feelings. Whatever your views, however, nobody should be forced to come out unless they choose to. Some of the actions in this made me unbelievably cross, and I hate the fact that this will be something people even have to consider.

I’ve read a couple of views criticising this novel for being so similar to some other stories. I can’t comment on that, but I can certainly say how much I enjoyed this story.

Our main character, whose point of view we’re predominantly focused on, is Kai. He knows he’s gay, but hasn’t said anything to either his friends or family. He seems fairly happy in himself, but we learn he’s desperate to head to college so he can be himself. Kai is a character on the periphery of his high school experience, but he finds himself in a rather unusual situation.

This situation involves the school golden boy, Bryson Keller, who’s got himself caught up in what could be a pretty crass scenario. Whoever asks him out on a date each Monday he has to accept, and date them for the week. For reasons I’m still not totally sure about – but it stems from a chance detention and a drama task – Kai ends up asking Bryson on a date. And he agrees.

We follow Kai and Bryson through their somewhat unexpected week. They keep it quiet, and at points I feared this might be because Bryson was going to do something awful. That wasn’t the case, though, and this quickly becomes a tale of two boys finding a mutual love. Almost insufferably cute, it would take a fairly hard-hearted person not to warm to these two.

There’s hints that this will not be plain sailing. I know some might have a worse experience, but when it matters people are generally seen to do the right thing. Kai’s little sister was wise beyond her years and the kind of cheer squad anyone would be proud to have. Plenty to like in this, and I’m grateful to NetGalley for allowing me to read this prior to publication.