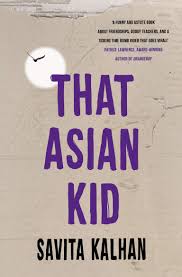 I felt slightly uncomfortable reading this in public, because I felt the title was definitely contentious, though it makes perfect sense in light of the story. This wasn’t a book that I would probably have picked up, but it’s made its way onto the long-list for the 2020 Carnegie Awards and I always try to read as many of these as I can in advance.

Our main character is fifteen-year-old Jeevan, a third-generation Asian boy who is predicted to perform well in his upcoming GCSEs – apart from in English Literature. No matter what he does, he doesn’t seem to do more than scrape by in this subject – and Jeevan is convinced that it is because his teacher is prejudiced against him because of his ethnicity.

We follow Jeevan one day as he takes a shortcut home through the woods. He is indulging in his one act of rebellion – a sneaky cigarette – when he hears noises. Most people would make their presence known, or leave, but Jeevan hides and what he sees then puts things in a very different position. What he sees is his much-disliked English teacher having sex with his History teacher. I’m not sure how credible this is, but Jeevan records the illicit encounter, then spends days feeling worried about what to do with it.

While Jeevan is sitting on this time-bomb, things go from bad to worse in school. This particular English teacher seems to look for opportunities to get Jeevan into trouble. She criticises him and punishes him but not others; she ‘loses’ his mock-exam paper and claims he threatens her. Jeevan ends up feeling increasingly alienated in school, and when he records the same teacher clearly making racist comments about him and other students he decides it’s time to get his own back. Jeevan is excluded, and reluctantly gets his parents involved in the battle to clear his name.

I’d love to think that behaviours described in this book don’t happen, and it’s very obvious that there is a breakdown in the relationship between these two that quickly escalates into something more serious.

What I found most infuriating in this book is that Jeevan and his friends are described as clever students, but they get themselves into an easily avoidable situation. While Jeevan’s behaviour is, at times, reprehensible we never really see him do anything other than find ways to try and justify his actions. Few of his friends try to do anything other than a token attempt to offer alternative actions, and the behaviour of the teacher herself was so unpleasant that it was difficult to find much sympathy for her.

Perhaps this won’t make it onto the short-list for Carnegie, but it’s certainly a book I’d encourage students to read and ask them to consider the portrayal of not just Jeevan but the issues raised.