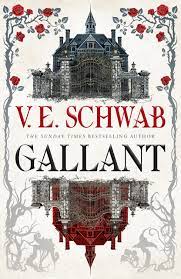 Our main character, Olivia, has always felt herself to be something different. An orphan, with no voice, Olivia is used to feeling unwanted and mocked…but she has always been able to console herself with the spirits she senses around her. This marks her out as an object of ridicule for the other students at Merilance School for Girls, but it clearly signifies there is more to Olivia than we might think.

Just as plans are being made for her to leave the school, a letter appears from her Uncle and Olivia is taken back to Gallant. She knows nothing of her family, but feels drawn to this place though her cousin seems resentful of her presence.

As Olivia settles into Gallant she learns a little more of the Prior curse and gets to learn a little more about her mother. While these questions make sense for anyone in Olivia’s position, it becomes clear quite early one that someone in particular has a vested interest in winning Olivia over.

Not knowing the secrets of Gallant places Olivia in a difficult situation. She is, without realising it, in danger and we can only watch as she throws herself headlong into her investigations without truly understanding their significance.

While the book itself reads very much like a middle grade/children’s story, the themes of loss and the paranormal setting mean there is much for older readers. The open-ended nature of the ending might frustrate some readers, but I liked the fact that Olivia was given a choice for the first time in her life. 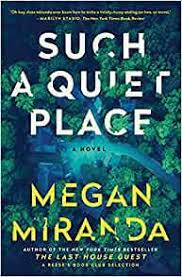 Such a Quiet Place begins a little too slowly for my liking, developing our understanding of events before picking up the pace and finally forcing our narrator to play their hand.

When Ruby returns to the quiet neighbourhood of Hollow’s Edge people are surprised. People suspect her motives. People wonder what she has to gain. This is because Ruby has just been released from prison after being wrongfully charged with the murder of two of her neighbours. She turns up at her old house, where her roommate Harper wonders just what she is going to do next.

From the opening we get a sense of Hollow’s Edge as the kind of community where, superficially, things are perfect but it only takes a little digging to realise that’s not the case at all.

A substantial part of the book establishes some of the key events of the past but also sets up our cast. When Ruby is found dead after a pool party, it doesn’t take long for the police to label it a homicide. So then we watch as characters’ behaviour changes. Who has most to lose? Who’s hiding what?

The truth is not quite the dramatic reveal that was implied. However, we see that people can do anything when they feel it will serve them well. I was rather surprised by Harper’s role in the key events, and did wonder why such a large cast had been brought in and not all developed fully. 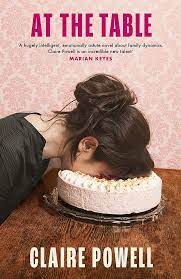 A glut of recent releases feature a character face down on the cover. This one really tickled me when I saw it, but the subject matter is a lot less humorous than it might appear.

At the Table is a debut novel focusing on characters and their interactions with one another. Though major life events take place, this novel focuses primarily on the little moments that make up the mosaic of our lives.

Our focus is a family comprising Gerry and Linda and their grown-up children, Jamie and Nicole. Their lives have been marked by meals, and this focuses on a year in their lives at different moments. We start with a meal where the parents reveal they’re getting divorced and we end with a meal shared with mother and daughter who are, due to the events they’ve been through, forging a new relationship. Along the way we have celebratory meals, catch-up meals, drunken meals but our focus is always the family and their gradual discoveries about themselves and each other.

Powell paints a frank yet tender picture of people at their lowest. The events felt, on occasion, as if they were washing over me but I found myself touched by the attempts of the author to show the characters shifting and developing.

Thanks to NetGalley for giving me the chance to review this prior to publication. 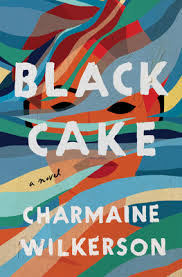 Black Cake had me gripped at the start and, though I can understand why some feel as if rather too much was added into the pot by the end, it will definitely go down as one of my highlight reads of the year.

The book opens with estranged siblings Benny and Byron being called to attend a meeting with their mother’s lawyer to hear the recording bequeathed to them. Details are, initially, sparse but we learn that their mother had a secret. A secret that now she is dead can be shared.

The story she wants to share with them explains exactly who Eleanor Bennett was. They learn of their mother’s past living with her immigrant father, the ill-fated marriage with an older man her father was in debt to, her new life in Britain and her journey towards the life she grew into in California. While her story may be familiar in many ways for the time, it comes as a shock to her children.

I loved the structuring of this book and the gradual way we got to learn about the lives of all the characters involved. The characters are not without flaws, but their resilience and determination to try and do their best was something that I found appealing. I enjoyed reading about Eleanor’s experiences, and the love story between the key characters was well-depicted. As a number of reviews point out, there’s a shift towards the latter stages of the book to social commentary with a lot of issues being explored, but I think this reflected the rich tableau of characters and experiences we were introduced to. It certainly did nothing to diminish my enjoyment of the story laid before us. 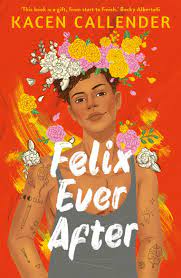 I admit to picking this up because I fell in love with the cover…sprayed edges made this a joy to look at. The content felt as if it might be an awkward read – I wondered if I could honestly sit through something where a character who is trying to be themselves gets such awful abuse. How would the author tackle some pretty hard-hitting issues?

I needn’t have worried. From start to finish, I was in safe hands.

Callender creates a very real character in Felix. Trans, black and gay…he worries he will never fit in anywhere and wants nothing more than to fall in love. He is a talented artist, but his feelings around his identity seem to be preventing him from really expressing himself. He gets angry, he messes up, on occasion he does some really hurtful things and yet there’s a searing honesty to him that I found touching.

The story focuses on Felix coming to terms with some questions about his identity, developing relationships and coming of age. There’s romance, though not quite in the way I expected it to go.

There’s no escaping the fact that the incident that is at the heart of much of the book – another student’s disgusting gallery show of old pictures and public deadnaming of Felix – was stomach-churning. The response from Felix and his friends was not, perhaps, the most sensible…but it was done with the right intentions. I loved the strength and support shown to Felix by those who he didn’t always recognise as allies.

While the love triangle was necessary to help Felix start to realise what/who mattered to him, I found myself most impacted by the scenes involving Declan’s grandfather and Felix’s dad. It was nice to see someone else’s view of things, and it was encouraging to see that people in such a situation will react differently.

There’s no guidebook to how to manage such a scenario, but this book will certainly offer support and encouragement. Highly recommended (and the cover is so beautiful that I’m tempted to put it on my bookshelf the wrong way round just so I can see the edges!) 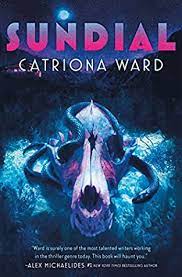 Sundial is a curious read, where I admit to feeling things were eluding me at key moments. This wasn’t a bad thing, but it was a mercurial read and I’m still not wholly certain that I fully understood some of the finer details of our characters’ situations.

Ward creates a delightfully menacing environment in which our characters exist, but there were too many instances in which I found myself puzzling over exactly what was happening to feel quite as enamoured of this as I did The Last House on Needless Street. However, it is a story that explores some troubling scenarios and definitely encourages us to consider how our environment shapes us.

Our main character is Rob, mother to two young girls – Callie and Anne. There are hints that she is in an abusive relationship and it appears that Callie has rather disturbing tendencies. As a means of trying to help her daughter, Rob takes her to Sundial…the home of her childhood.

Alongside the story of Rob and her family, we have flashbacks to Rob’s past. It soon becomes clear that Rob came from a less than healthy environment, and that there are plenty of questions about her family.

I found myself perplexed by the details given about Rob’s younger life. The horrors she experienced as a child seem to have been swapped for other awful things…and yet she seems drawn to the darker elements of her experience. Without giving crucial plot details away, I am still convinced that Rob is not who we think.

By the time we draw close to the end of the story it is obvious that there will be deeply unsettling revelations. There’s an attempt to misdirect us somewhat, but the details of Rob’s past hint at what might be happening. I liked that the ending remained ambiguous in some ways though I can’t help wishing we’d got other viewpoints.

Thanks to NetGalley for giving me the opportunity to read this before publication. 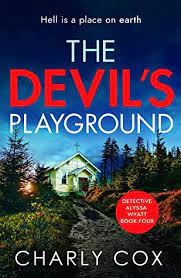 Thanks to NetGalley for giving me access to this before publication. While The Devil’s Playground takes on an unpleasant subject, we are spared the worst of the details and this makes it slightly easier to read.

Our story begins with London reading a story to her friend’s two young children when she hears noises she wasn’t expecting to. Concerned by this unexpected occurrence, she hides with the children in the closet and we are in for a tense wait as we try to work out what this might mean.

The evening results in the ritual killing of two young women, the abduction of London and the children safe but traumatised by their experience. Detective Alyssa Wyatt is called in and, as with the previous books in the series, she approaches her task with grim determination to ensure she gets the result she wants.

The remainder of the book then splits our focus. We are given details from the perspective of Detective Wyatt as she investigates. We see the torment London is subjected to as she is tortured. We also see inside the minds of the two responsible for these brutal killings. What we don’t see until late on is how the little details combine, and exactly how the various details piece together.

Without giving too much away, this is a solid instalment in the series. We continue to see the main characters develop, and we also get an insight into their work.