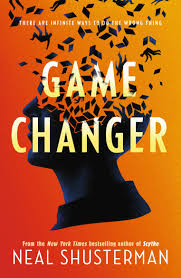 Game Changer will, I think, be one of those books that will polarise opinion. I’m grateful to NetGalley for granting me access to it prior to its scheduled February 2021 publication, and I think I would recommend it to people, but there are issues that make me wonder if this was quite the right way to get the intended result.

Our story focuses on Ash, a fairly typical privileged white American boy. He plays football. He has relatively open relationships with his friends and family, but there’s a sense of things being held back. This doesn’t cause undue concern, but then Ash is involved in a play that has far-reaching consequences. We journey with Ash as he experiences these strange events, the result of being knocked into another dimension.

Initially, until we have an explanation for what has happened, I was quite disengaged with this. Ash is not a particularly interesting character and I found his processing of events and the implications for him just a little patronising. There seemed to be just a little too much focus on him articulating his reasoning for behaving in the way he did, and trying to justify some of the choices he makes. He seems to comment lots on everyone around him, but to be quite unaware of his own shortcomings and this annoyed me on occasion.

Thankfully, quite early on we get some answers that what has happened to Ash is out of the realms of the ordinary. He has shifted reality and each time he does this he is able to change things. Sometimes this works well; sometimes not. Each time it happens, Ash learns something new about himself and the world around him. His only guides through this are twins (who are added to each time he changes things) keen to see if this time round the thing placed at the centre of the universe can make things better.

Ultimately, in each reality Ash experiences there are unpleasant things to address: racism, sexism, homophobia. You name the issue, we get it. Ash gets to live in different realities, each experience opening his eyes to the issues faced by many and the ignorance that many of us live in without even realising it. There was a clear sense of him growing as a person, albeit sometimes this feeling seeming forced on him.

After a rather slow start, the book became more engaging. I got quite caught up with Ash’s experiences and found the interactions between Ash and the other characters quite interesting. Unfortunately, though there were lessons to be learned – and Ash clearly set out his growing self-awareness in a way that often felt unnecessary – the fact that he ended up in the situation he did suggested that in a world of possibilities we will often settle for what is familiar enough to not be overly threatening. For me, this was not so much a Game Changer as a way of highlighting that change can be necessary and we should look for opportunities to improve things. 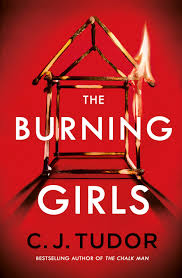 Thanks to NetGalley for granting me access to this before its publication in January 2021. Unsettling but riveting, and while elements of this were tough to read the overall impact is powerful.

The story focuses on single mother Jack Brooks, a vicar, and her daughter. After an awful incident involving one of her parishioners Jack is troubled, and the Church is unsure how to support her. Their answer is to pack Jack off to Chapel Croft, a temporary placement in a small Sussex village. This village has a long and troubled history, and from their first day in the village it is evident that this place harbours many secrets.

As we follow Jack in her role we are given a number of clues about her mysterious past. She has her own secrets, and has had her own share of troubling experiences. We don’t learn the exact nature of these until later…but there’s little hints and I was desperate to know how her story tied in with that of the mystery voice – a character recently released from prison who we know has committed awful acts and for reasons we’re not sure of wants to find Jack.

The focus on Jack’s mystery was certainly intriguing, but the historical focus of the Sussex Martyrs and the two village girls who disappeared years earlier was just as interesting. The previous vicar had spent time investigating these incidents, and there’s lots of clues given as to what happened though the significance of certain details isn’t pertinent until later. The body count was surprisingly high, and I can only imagine the fun Tudor had planning this and working out how to combine elements of a number of story threads.

I don’t want to say more in case of revealing certain plot details that are best learned at the point Tudor chooses to reveal them. Suffice to say, if you enjoyed her other novels this will probably go down well. There are some elements of the story that aren’t fully resolved and yet this ambiguity – for me, anyway – showed all too clearly how the boundaries between evil and horror can blur. 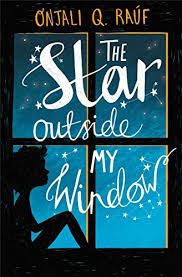 Aniyah and her brother, Noah, have gone to live with Mrs I and the children she fosters. We know very little about their circumstances but can glean something major has happened. Both are traumatised by their experiences and talk of their mum becoming a star hints at what might have happened.

As the story progresses we learn of the games they used to play with their mum that clearly indicate a life of abuse at the hands of their father. Their wariness and defence mechanisms are tough to read about as an adult.

Reading this as an adult was probably quite a different experience to that of the target audience. Much is hinted at and the details are sparse, but they offer enough to firmly place you on the side of these kids and others like them.

The main focus of the story is the madcap plan to get to the Royal Observatory in order to make sure that the newly discovered star is given their mother’s name. Ignoring plausibility this was the kind of madcap scheme that had you hoping they’d succeed. It was also a welcome relief to have the madcap dash – involving a brilliant moment with squirrels – to offset the high emotional impact of this story.

Though it was clear what had happened, the final stages of this where Aniyah has her moment of acceptance were hard. In spite of sitting on the bus reading I had tears rolling down my face and found myself needing a moment to digest what, for me, was a sensitively told story but what, for many, will be a grim reality. 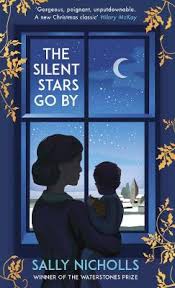 Margot has been in love with Harry ever since his family moved to their village. As a vicar’s daughter Margot knows certain expectations are held for her, so it is something of a shock to learn that nineteen year old Margot is actually the mother of a toddler. The father, Harry, went missing in action and doesn’t know he has a child.

Worried about the social implications of having a child when unmarried, Margot’s parents engineer events so that they adopt the child and he is raised as their own. Now nineteen, Margot wonders how she can reconcile her thoughts and feelings with her sense of duty.

The story is quite a familiar one, so I’m assuming this is a foray into the context for younger readers.

We see things through Margot’s eyes and, in the main, it’s all a little superficial. I would have liked to know a little more of Harry’s thoughts upon learning the truth, and for a family so worried about what others would think of them there was little to indicate this was necessary. The elder brother suffering was also somewhat glossed over.

I felt sympathy for the experience of all those involved, but it never really developed in a way that made me feel overly engaged. I’m sure, however, that younger readers of those who don’t know much about this period in history will fall under the spell of Margot and her family and wonder how things were ever like this.

I think I might have found myself an author to try more by. For such an unpleasant subject I found reading this very oddly moving.
Initially we open with what is clearly an unpleasant scenario – a killer explaining the physical and mental high he achieved from strangling his victims with a noose. This was definitely a little close for comfort, but we then switched action and focus which offered a very different experience and this switch in timeline/narrative voice opened up an intriguing read.
The Thief was the moniker given to the man who was eventually charged with killing Angela Mitchell. No body was ever found, and it was thought – because of investigations carried out by Angela – that this man was actually responsible for many more murders.
We follow Angela as she deals with what she calls her obsessions. Convinced there is something odd she, like many at the time, is keen to know what happened to the women who have disappeared. She is suspicious of many, determined to use her notes and thoughts to work out what exactly happened. Unfortunately she soon learns that things are a lot closer to home and we worry about what happened to her. Her nature and depiction (as an autist at a time where misunderstanding was rife) was sensitively done.
Much of our time focuses on Rory Moore, a difficult character but one who I found fascinating. Shunned by many, definitely not comfortable in herself, but she is an expert in solving cold cases. When her father dies Rory is trying to tie up his business when she learns that she will have to take on his final outstanding case – getting parole for The Thief. Wondering what on earth her father was doing leads her to undertake some digging of her own. What she learns then shocks her to the core, and though we suspected her father might have closer links than we were expecting, this took us to a very different place.
Alongside the story and the time frame I was intrigued by the various characters that featured in this story. The benefit of hindsight is a wonderful thing, and perhaps much could have been done differently, but this situation and the resolution was far more emotional in its impact than I expected.
I am very much looking forward to seeing more of Rory in her role.
Skip to toolbar