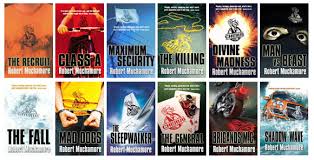 As part of my Goodreads YA group challenge, November and December focuses on series reads. Sometimes this means persevering through books that you might prefer to leave – dare I say it Morganville Vampires series – but it can also act as a great means to an end…clearing up books lingering on the shelf that I keep meaning to get to, but never quite manage. Occasionally it makes me read something that I hadn’t considered.

The Cherub series is one of the latter.

Much loved by many of my reluctant – inevitably, boy – readers, the series takes the spy genre and modernises it a little. In this series, CHERUB is a secret Government organisation made up of children aged 10-17 years old. They are highly skilled, all highly intelligent and utterly lethal thanks to their intensive training. Unfortunately, they are still teenagers so their behaviour is often intensely frustrating.

Our main character is James, a young boy who ends up in trouble with the police after the death of his mother. Volatile and yet highly skilled in many ways, James is an ideal candidate for this organisation. We follow him through his training and each book focuses on a mission that the agents are sent on.

As an adult reading these – and particularly reading them back to back – the formula is readily apparent. You know what to expect and Muchamore delivers. James himself is in turns beguiling and irritating. Some of the ideas/references are starting to feel a little dated now, but I can certainly see the appeal for readers who like books full of action. It also doesn’t hurt that, deep down, I think many people would love the idea of being part of such a group.