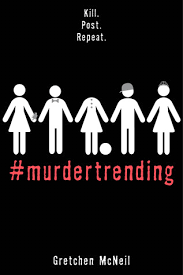 A book that will have you gripped, but groaning in places. Graphic violence aplenty, but it’s done in the Scary Movie-style which makes it seem slightly more readable.

In this near future we’re asked to imagine that an ex-reality star has become President of the US and that his attempt to sort crime is to link it to entertainment. Those found guilty of serious crimes are sent to Alcatraz 2.0 where criminals are killed off in grotesque and macabre ways by a team of executioners and their murders are televised for entertainment.

When Dee is accused of murdering her step-sister (who was obsessed with the program) she is immediately thrown to the wolves. Yet, somehow, she survives and kills her supposed-to-be executioner. As a result she tops the list of inmates betted upon to be top of the kill list. However, Dee finds increasingly bizarre ways to survive.

We quickly learn Dee has secrets, and it soon becomes clear that her current situation is linked to these secrets. The actual links weren’t immediately obvious.
No real message here, but it was an interesting idea to see how the characters acted under pressure, and the style was likeable (even though the content was not).