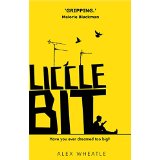 I picked this book up because it is on the Long-list for the 2016 CILIP Carnegie Awards. With its focus on teenagers living surrounded by gang-related crime, I felt it had traces of ‘Pigeon English’ by Stephen Kelman.

Lamar – Liccle Bit – lives with his mother, grandmother, sister and nephew in South Crongton. He dreams of escaping his limited world, but isn’t entirely sure how he can achieve this. His dreams look even less likely to come to fruition when the local gang-leader – who also happens to be the father to his nephew – starts to take a special interest in him. Without really being aware of it, Lemar is soon in over his head.

While the backdrop to this novel is bleak, the book was full of humour and I loved the depiction of Lemar and his friends. My only gripe was the ending. While it makes sense to maintain the focus on Lemar and his family, I really would have liked to know a little more about how certain events were resolved. 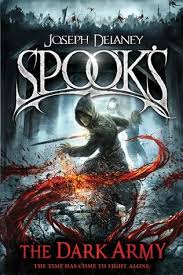 The cover provides a tantalising glimpse of just how serious things have become. It also provides some reassurance that things are not – certainly in the beginning – as bleak as we thought they were at the end of the previous book.

It’s hard to talk about this novel without giving away crucial plot details. What I can say is that it was great to see some familiar faces again. Of course, things have changed since the last novel. The threat of the Kobalos is becoming increasingly concerning, and I really got a sense of Delaney turning the proverbial screw on this story.

As Tom is pushed into unfamiliar territory we are carried along with events occurring at breakneck speed. The descriptions of the battle scenes are, at times, more graphic than we’ve seen previously but in the grand scheme of things it seems to make sense. I’m not sure I’d forgive Joseph Delaney for an event that happened in the closing chapters, if it weren’t for the fact that there’s a sneaky peek of ‘The Dark Assassin’ included and it seems that we see more from one of my favourite characters.

Thank-you once again Joseph Delaney for a riveting read, packed with action and more than its fair share of surprises.